For God and Country, we associate ourselves together for the following purposes:

To uphold and defend the Constitution of the United States of America; To maintain law and order; To foster and perpetuate a one hundred percent Americanism; To preserve the memories and incidents of our associations in the great wars; To inculcate a sense of individual obligation to the community, state and nation; To combat the autocracy of both the classes and the masses; To make right the master of might; To promote peace and good will on earth; To safeguard and transmit to posterity the principles of justice, freedom and democracy; To consecrate and sanctify our comradeship by our devotion to mutual helpfulness.

Section 1. The name of this organization shall be Guy C. Parlett Post No.7, Inc. The American Legion, Department of Maryland, herein identified as The Post. Incorporated in honor and commemoration of Lieutenant Guy C. Parlett, who was the first man from Annapolis to die during World War I.

Section 1. The objectives and purposes of the Post shall be to promote the principles and policies as set forth in the foregoing Preamble, and the National and Department Constitutions of the American Legion.

Section 1. The Post is a civilian organization and membership therein does not affect nor increase liability for military or police service.

Section 2. This organization shall be non-political and non- sectarian and shall not be used for the dissemination of partisan principles nor for the promotion of the candidacy of any person seeking public office or preferment.

Section 3. All persons are equal in the American Legion; therefore, no member shall be addressed by his or her military title at any meeting of this Post.

Section 1. Eligibility for membership in the Post shall be as prescribed by the National Constitution of the American Legion.

Section 1. The administrative affairs of the Post shall be under the supervision of an Executive Committee consisting of the Officers of the Post and three elected members at large except as may be otherwise provided by the By-Laws. In accordance with the By-Laws, the Post may provide for such other standing committees as the business of the Post may require.

Section 1. The revenue of the Post shall be derived from annual membership dues and such other sources as may be approved by the Post Executive Committee or membership.

Section 2. The amount of such annual dues shall be fixed and determined by the membership of the Post.

Section 2. The Post recognizes the Southern Maryland District Council and Anne Arundel County Council and will elect or appoint delegates to both each year.

Section 2. This Constitution may be amended at any regularly convened meeting of the Post by a vote of two-thirds of the members present provided the proposed amendment has been submitted in writing and read at the previous regularly convened Post meeting. To notify members that a vote will be taken to amend the Constitution, written notice shall be mailed to all members at least five days in advance of such meeting. The Newsletter may serve as such notification.

Section 1. All applications for membership shall be acted upon at the next regular meeting of the Post after receiving the application. They shall be accepted, rejected or referred for further investigation and consideration at the next meeting. A rejected application shall not be considered again until six months after the date of such rejection.

Section 2. An applicant for membership in the Post who has been suspended from another Post in the American Legion shall not be admitted to this Post.

Section 3. Any member of the Post may be suspended or expelled upon just cause. All such charges shall be based upon disloyalty, neglect of duty, dishonesty or conduct unbecoming a member of the American Legion. All charges must be made under oath and in writing. A member in good standing shall not lose his/her membership until given a fair trial. Any member who has been suspended or expelled shall have the right of appeal to the Executive Committee at the Department of Maryland, The American Legion.

Section 4. A member who has been expelled from the Post for any cause may be reinstated to membership by an affirmative vote of two-thirds of the membership present at a regularly convened meeting. Reinstated members shall pay to the Post all dues that were payable at the time of such expulsion to make dues current.

Section 5. Any member of the Post in good standing who moves away shall be entitled to a certificate of transfer stating current membership herein and duration thereof.

Section 1. The terms of office of Officers of the Post shall be one year. The term of office for Post Executive Committeemen shall be three years, one new member being elected each year to replace an expired term. Officers and Post Executive Committeemen shall hold office until the Department Commander takes office at the Annual Convention in July.

Section 2. Nominations for Officers and members of the Executive Committee
shall be accepted beginning at the April meeting to conclude at the end of business the day before the May meeting. Election of Officers and members of the Executive Committee shall commence at the beginning of business on the day of the regular meeting in May and conclude at the start of the meeting. A panel of three members will be assigned to count the ballots and announce the results during the "Good of the Legion". In the event of a tie, the winner will be determined by a vote of the members present.  All Officers and Executive Committee members shall be installed no earlier than twenty days prior to, but no later than twenty days after the Annual Department Convention.

Section 3. All Post members who pay dues locally and to the National and Department Headquarters shall be considered members in good standing and shall have the right to vote on any question. Membership cards shall be examined regularly by the Sergeant-at- Arms.

Section 1. Any Officer or Executive Committeeman may be removed by the membership of the Post for lack of performance of duties. A majority of two-thirds of the members present at a regularly convened Post meeting is necessary to effect such removal. Any elected position which becomes vacant for any reason before the expiration of a term shall be filled for the remainder of the term by a member who shall be nominated from the floor and elected as in all other elections.

Section 3. If any elected officer of the post is absent for three successive meetings without submitting good and sufficient excuse, the Post Commander, at his discretion, may recommend to the membership that the position be declared vacant. A majority vote of the post membership present at the next regular post meeting may declare the position vacant. If the Post Commander shall be so absent, the chair may be declared vacant by a majority vote of the Post membership present. To fill any such vacancy for the unexpired term, an election shall be held after proper notification in accordance with ARTICLE X of these By-Laws. At his/her discretion the Post Commander may appoint a person to act in any such vacant position until the election.

Section 4. Adjutant: The Adjutant shall be appointed by the Post Commander. He/she shall keep a full and correct record of all proceedings at all meetings. He/she shall keep such records as the Department and National organizations may require. He/she shall provide reports of membership annually or when called upon and under the direction of the Commander and shall manage the correspondence of the Post.

Section 7. Chaplain: The Post Chaplain shall be charged with the spiritual welfare of the Post comrades and shall offer divine but non-sectarian services for dedications, funerals, public functions and the like. The Post Chaplain shall adhere by such ceremonial rituals as are recommended by the National and Departmental Headquarters from time to time.

Section 9. Service Officer: The Service Officer is charged with bringing to the attention of all veterans and their dependents the rights and benefits granted them by law.

Section 10. Judge Advocate: The Judge Advocate shall rule on all matters of parliamentary procedure at all meetings of the Post. He/she shall perform such other duties pertaining to his/her office as may be required of him/her by the Post Commander and the Executive Committee.

Section 1. The government and management of the Post is entrusted to an Executive Committee.

Section 2. The Executive Committee shall consist of three elected members in addition to the Officers of the Post.

Section 2. The Post Executive Committee shall hire such employees as may be necessary to operate the Post, be the final authority for all terminations of employees for any valid reason, authorize and approve all expenditures, require adequate bonds from all persons having custody of Post funds and have charge of and be responsible for the management of Post affairs.

Section 1. Regular meetings of the Post shall be held monthly on a day designated by the. membership .. The only exception shall be the month of the annual Department Convention. All business properly brought before the body may be acted upon at any regularly convened meeting.

Section. 4. Six members shall constitute a quorum for any meeting

Section 5. The Order of Business shall be according to the American Legion Manual of Ceremonies. All proceedings of the Post shall be conducted pursuant to Robert's Rules of Order except as otherwise provided in these By-Laws.

Section 1. The Post Commander, upon taking office, shall appoint a Finance Committee and such other committees as he/she deems necessary for the proper functioning of the Post.

Section 1. Delegates and alternates for the Annual Department Convention shall be elected by the Post during the election of Post Officers with the exception of the Post Commander elect, who shall be a delegate.

Section 2. The Post Adjutant shall notify each member of any election of Officers by mail posted at least five days prior to the date of the election. The Post Newsletter may serve this purpose.

Section 1. The Post shall not incur nor cause to be incurred any liability or obligation which shall subject any other Post, subdivision, group of people, members of the American Legion, or other individuals, corporations or organizations to any liability.

Section 1. The Constitution and By-Laws of the American Legion, Department of Maryland, Inc. is hereby constituted.  All amendments adopted by a membership vote at a regularly convened Post meeting have been included in this revision as of September 1, 2011. 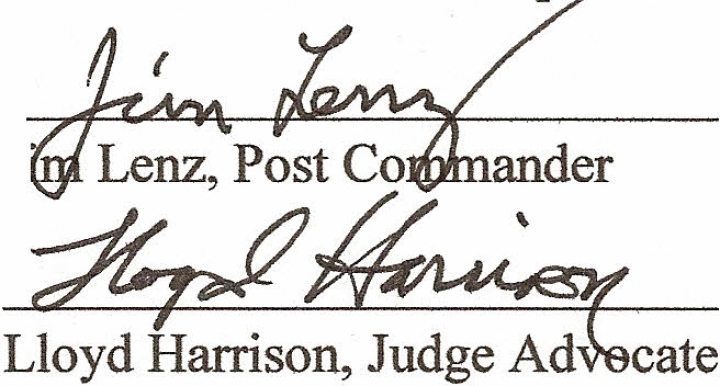