By November of 1918 the great American Expeditionary Force in France numbered upward of 2 million men, driving whole German armies before them.  The famous Armistice on November 11th, 1918  11 a.m. saw them at first exalted, then weary, and as weeks went on attitudes sagged.  In Paris, General John "Black Jack" Pershing asked his staff officers to come up with something to improve morale.  Heading this little group was Lt. Col. Theodore Roosevelt Jr., son of the great former President, who conceived a plan.  Pershing liked it.  Young T.R. then organized what is known as the Paris Caucus - - more than 1,000 men selected from all ranks, to hear it out.  Accepted unanimously over March 15 - 18, 1919, they founded the American Legion, today the largest veteran's organization in the U.S. and the world.

One of the men at the Paris Caucus was Andreas Z. Holley, of Annapolis.  Upon his return home weeks later, he met with 16 other local veterans, and on July 11, 1919 a temporary charter was issued to Annapolis Post 7.  It was named after Holley's late friend: 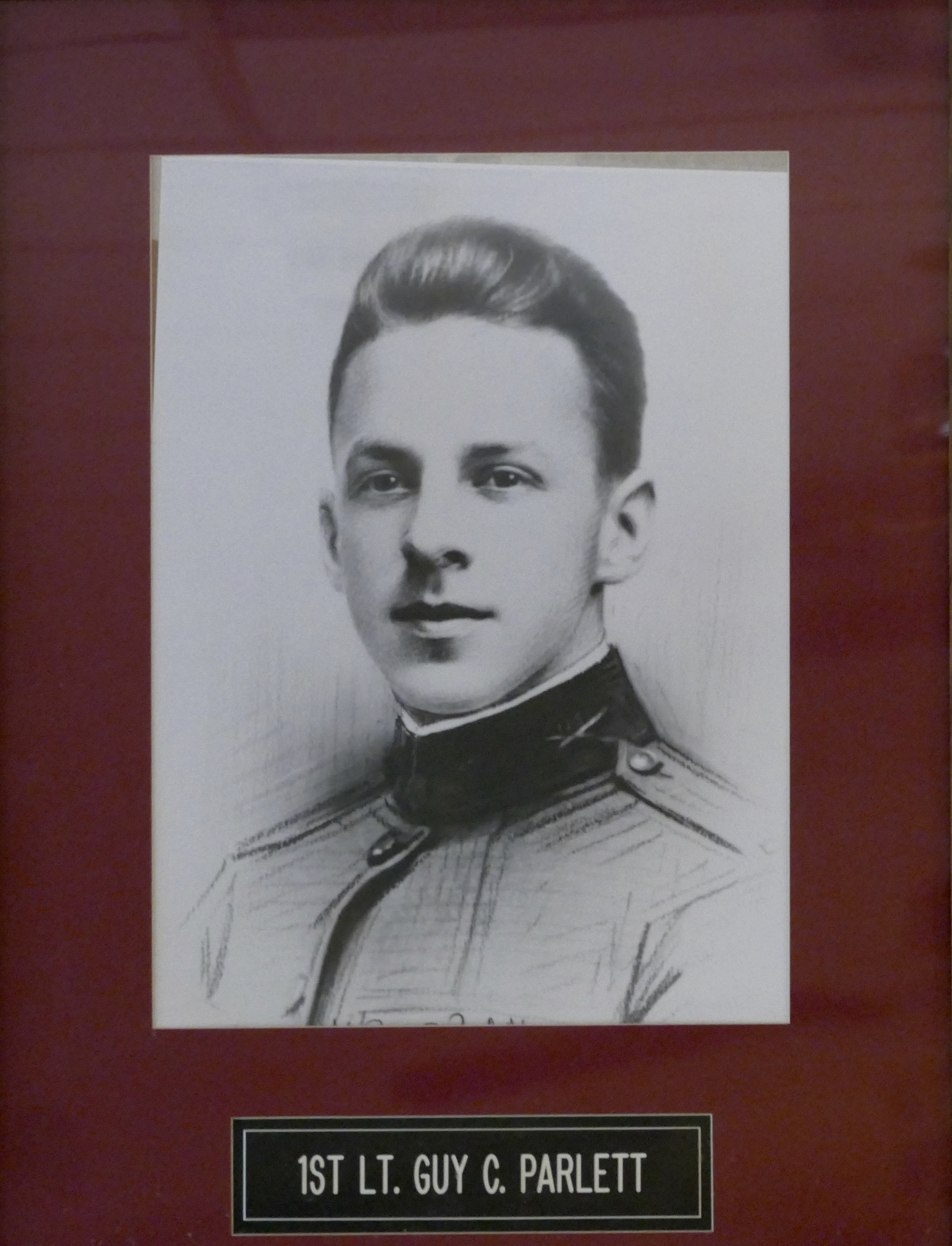 Guy C. Parlett was  from an old Anne Arundel County family. Though few went beyond the 8th grade, Parlett attended Annapolis High School and was an outstanding football player on its undefeated 1908 team.  Guy then moved over to St. John's Preparatory School -- a local route to entering nearby St. John's College (a  military academy until 1937).  He joined the Maryland National Guard at the Annapolis Armory, becoming sergeant of its Machine Gun Company.  Uncommon weapons demanded high skill and very adept handling. Parlett was a superior soldier.

In 1916, Pancho Villa began raiding Texas, and the regular Army went into Mexico after him.  The National Guard was  federalized to cover the U.S. border, and Guy's unit stood guard on the line. A year later Guy fell ill and was sent home to recuperate.

April 1917 the U.S. declared war on Imperial Germany and Guy's unit was prepared for overseas duty.  Parlett, then commissioned a 2nd lieutenant in the Army's 115th Regiment of the famed 29th "Blue & Gray" Division, went to Camp McClellan, Alabama for field training. On April 14, 1918 - just days before his unit was to deploy overseas, Guy C. Parlett died of pneumonia.

In 1919, back from the famed Paris Caucus that created the American Legion, Andreas Holley (of the same victorious high school footbal team and the same military unit) named the new Post in memory of his fellow player and close Army friend, Guy Carleton Parlett.

Service to veterans in general and Legionnaires in particular has always marked Post 7, plus prominence in civic affairs, cooperating and often sponsoring entire programs, both youth and adult.  During WWII members included a Battalion Commander of the State Guard and Civil Defence Director for the county, helped its Ladies Auxiliary man Air Raid stations, and among others won a National Citation for War Bond sales and recognition award from the Merchant Marine for services rendered.

Over the decades, the Legionnaires, Ladies Auxiliary, and the Sons of the American Legion Squadron of Post 7 have remained a steady support for aging and ill veterans, a warmly welcoming home-away-from-home for veterans and their families, and a solid backup for active duty personnel here and overseas, all with strong sense of remembrance and civic responsibility.